Thank you for visiting my web! This site is my spiritual comic website, I express with comic what I felt and experienced. 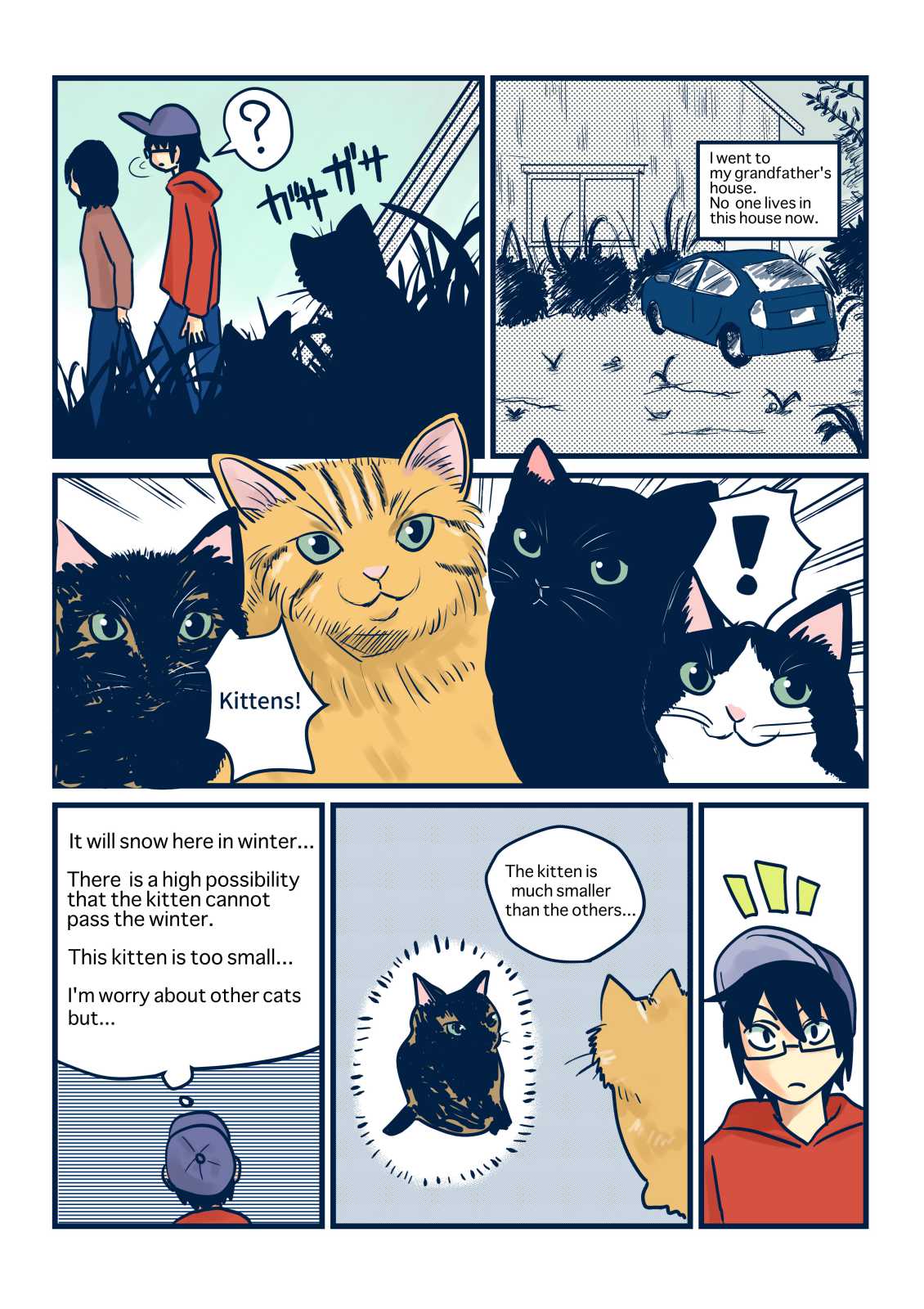 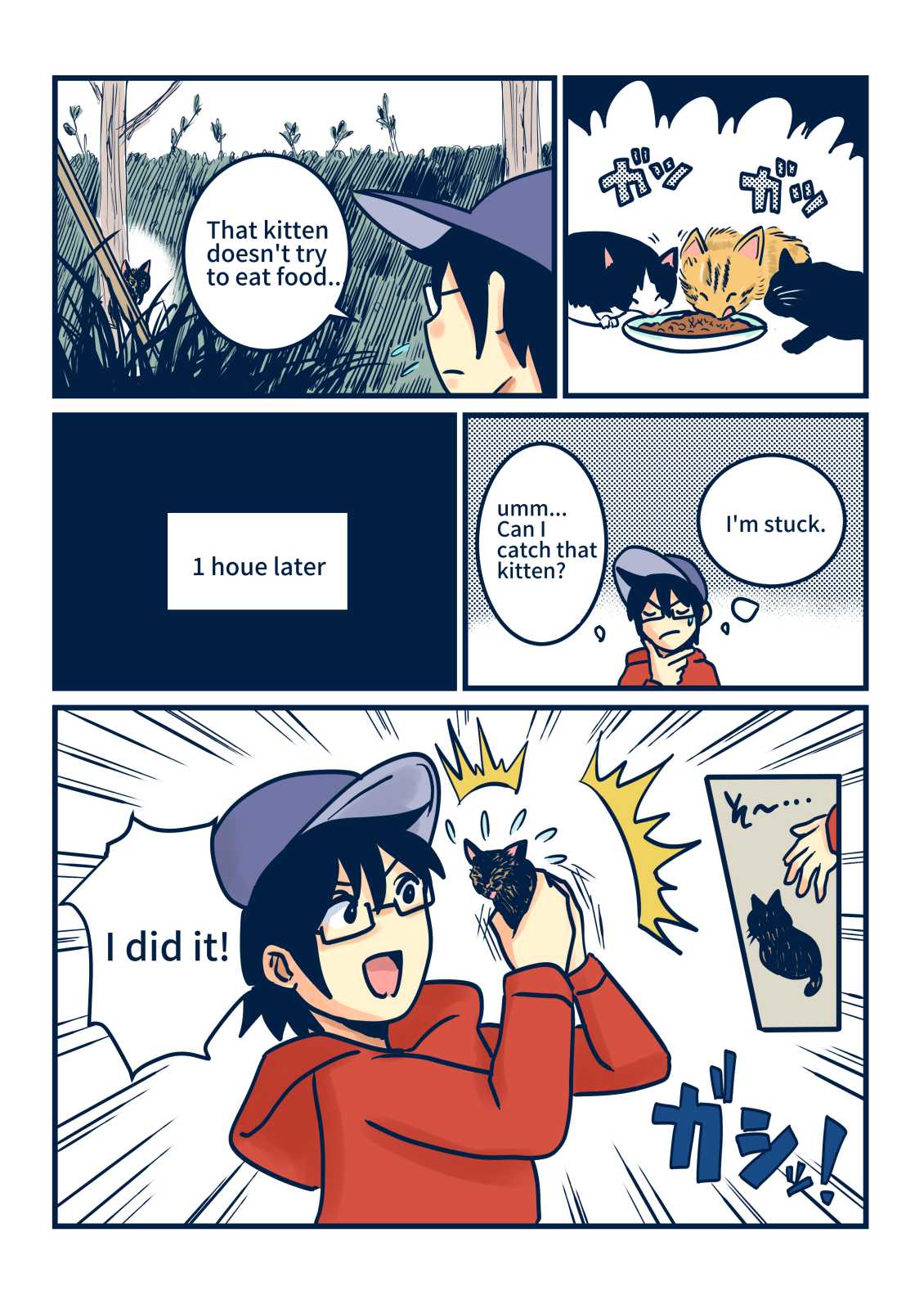 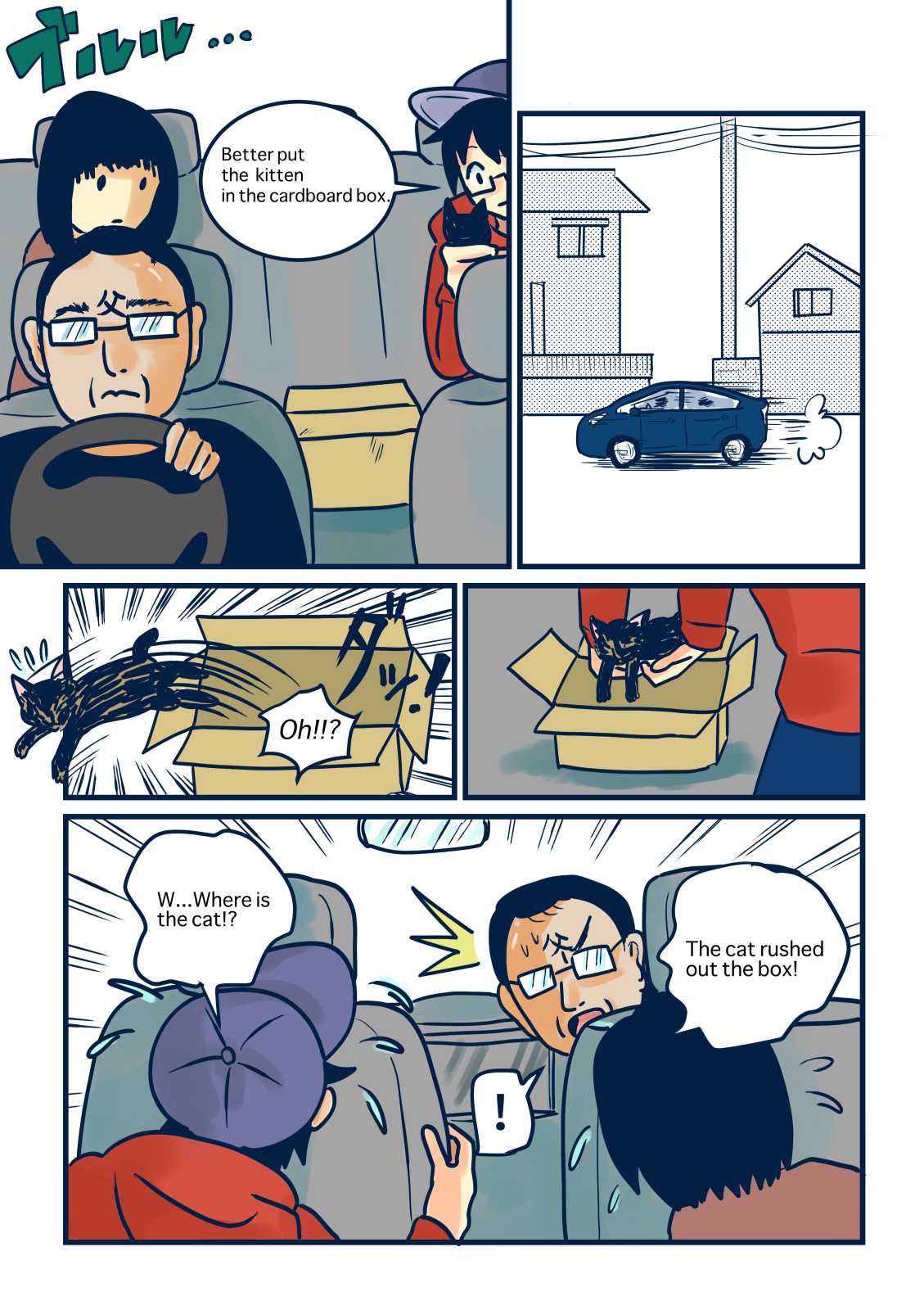 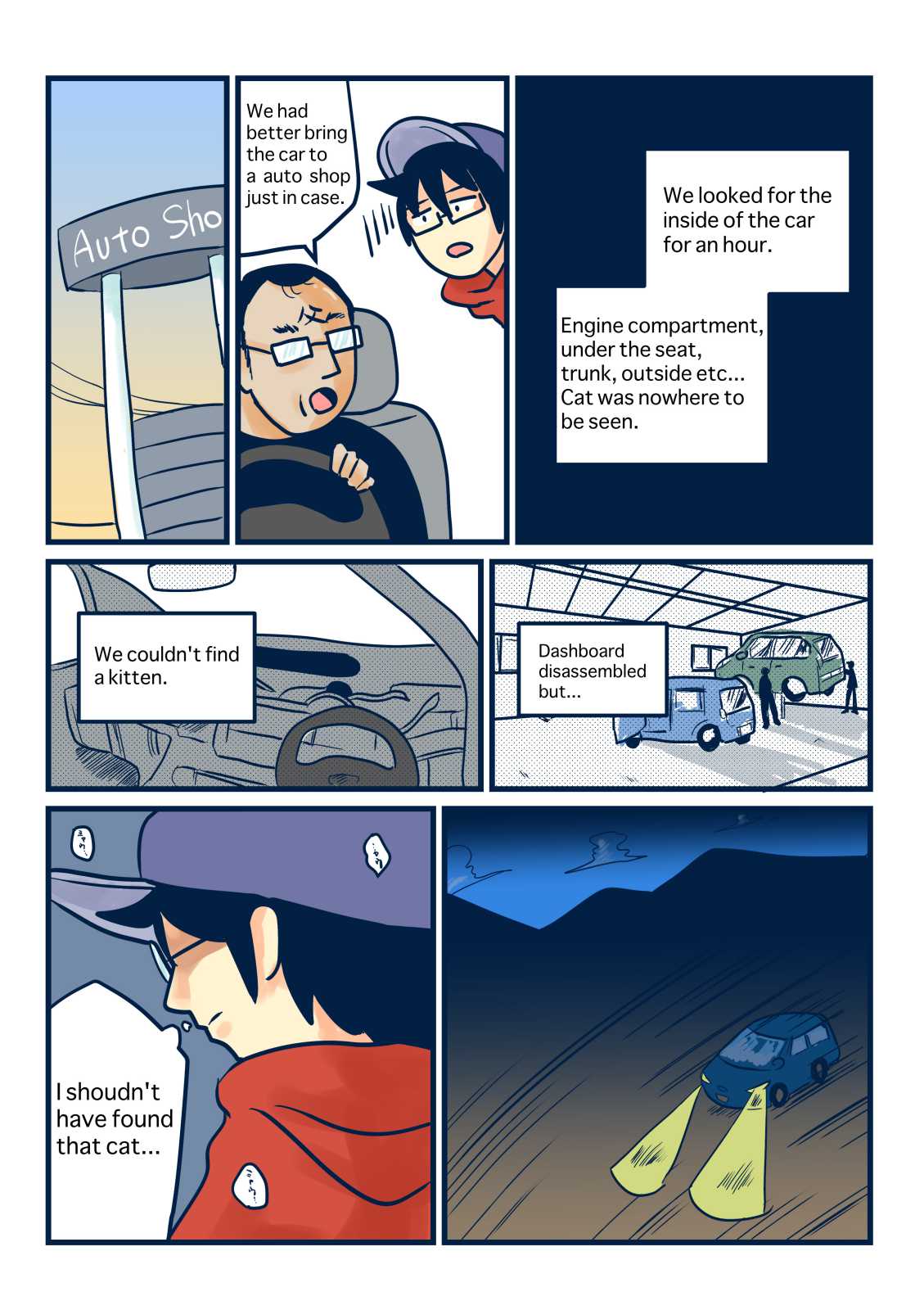 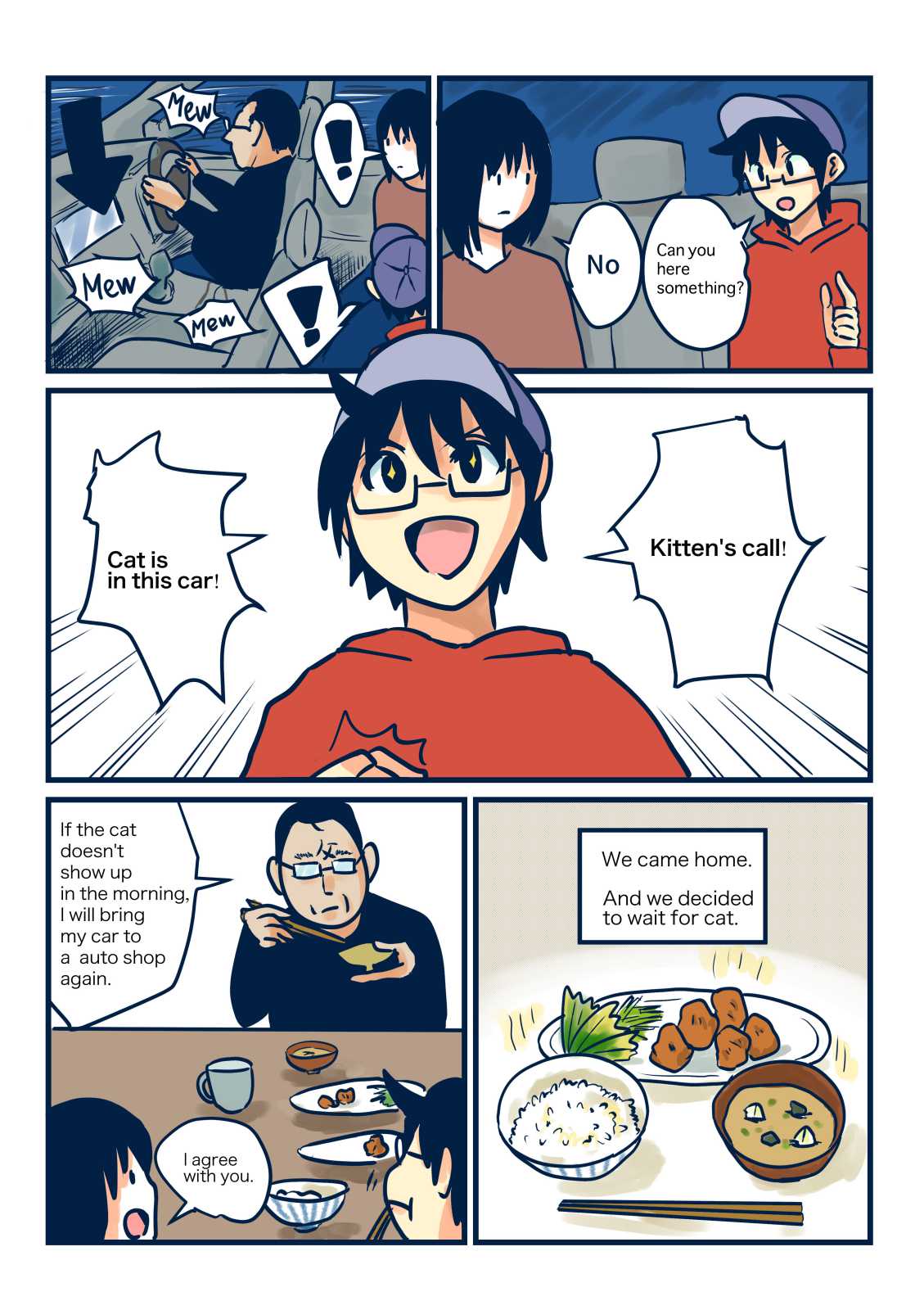 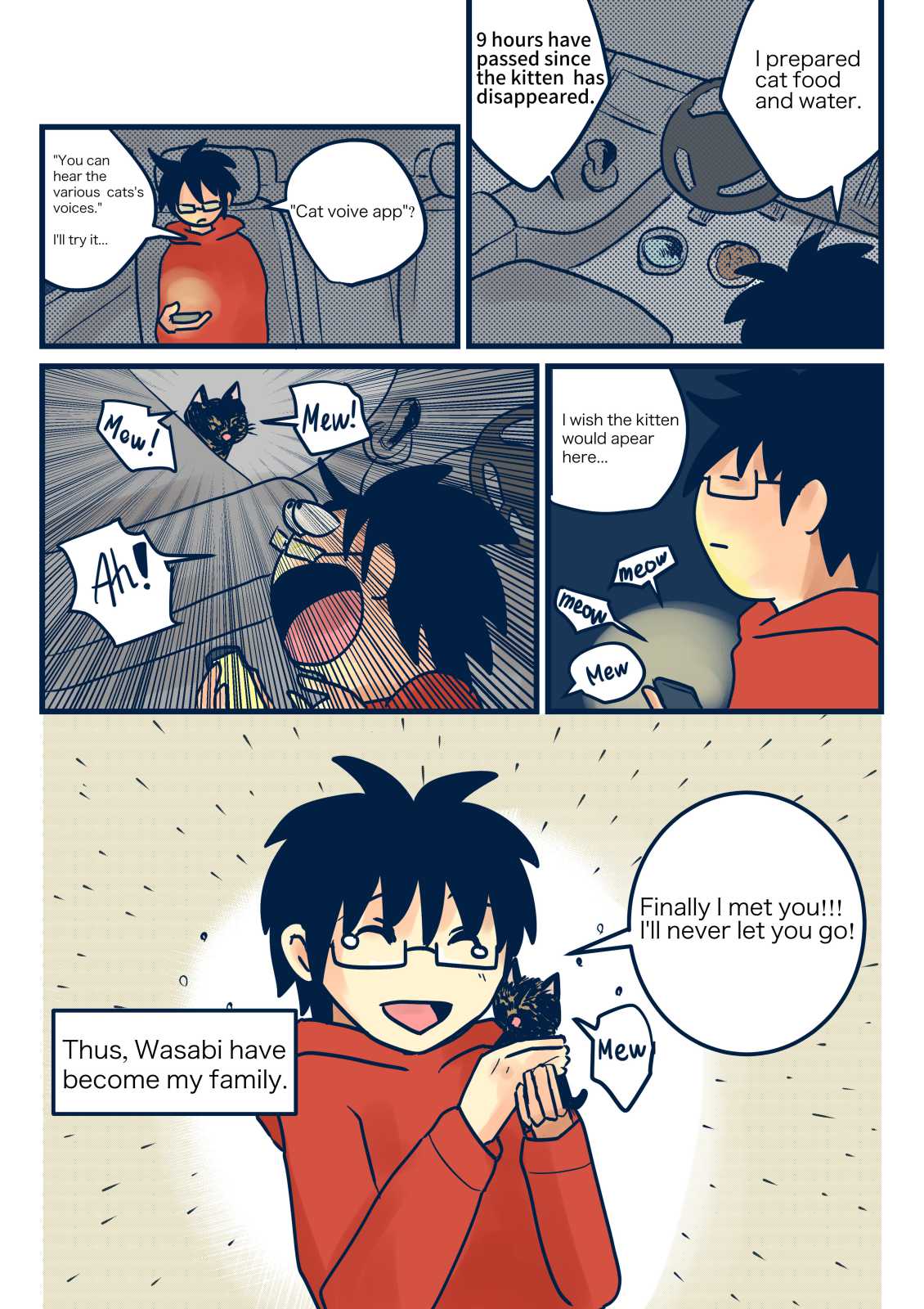 I will write about meeting with one of the three cats "Wasabi" this time, it's a long story.

About November 2017. My parents and I visited my mother's parents' house. The maternal grandparents died and no one lived in the house so this house was planned to be dismantled soon. The garden was overgrown with weeds and I was getting rid of them. And then, I found four kittens there. Every kitten had a very cute face, but I realized that one of them was very small compared to the other kittens. I thought "that small kitten may die before pass the winter." Because the cold season is tough for any stray cats, especially kittens are difficult to pass the winter.

So I didn't know if I could catch the kitten, but decided to buy some cat foods at a nearby store and feed the kittens. However, the three kittens ate a lot of cat food but the small kitten was just looking from a distance. There is a pecking order in the cat' world and the little kittens seemed to be very weak. An hour later, I was finally able to catch when the kitten was off guard. I noticed that there was a tortoiseshell cat nearby. It was probably a mother cat and her face showed, "Oh! My kitten is caught by a human!!" I cannot forget that facial expression even now.

We got into the car and decided to put the kitten in the cardboard. However, the kitten caught our off guard and broke out of it! We looked for the cat inside the car in haste, but we couldn't find the cat. On the contrary, we couldn't even hear the cat voice. By my father's suggestion, we decided to bring the car to a nearby auto-repair shop. Some car mechanics opened the car dashboard and checked everything, but we couldn't find the cat. We came to the conclusion that the kitten must have run away and decided to go home...

After a while, I caught a small sound in the car. When I listened carefully, as expected I could catch the kitten's voice from around the dashboard! Surprisingly, the kitten was hiding in the dashboard!

After returning home, I was going to wait and see. So then I set cat food and water in the car. Nearly 9 hours had passed since the kitten had disappeared. I finished eating dinner and waiting in the car. I tried the app that can play the cat voice. This app can play various cat voices, some sounds were mother cat. when I was playing the sound of a mother cat many times, suddenly I heard the kitten voice "Meow" from below seat. I looked at my feet and finally found the kitten! Thus the kitten were saved.

The cat who came to our house was named "Wasabi(わさび)".

What is a tortoiseshell cat?

The character of the tortoiseshell cat is here.

Actually, I didn't know much about tortoiseshell cat until now, but this time Wasabi has come to my home and felt strongly... she is very clever!! She may be the cleverest cat I've ever lived with. Of course I know it depends on the cat, but I was very surprised at her learning ability.
At the same time, it can also be said that being wise is timid. I think all of the above describes applies to my cat Wasabi.

If your cat disappears in the car?

I searched about "A cat disappeared in the car", it seems that cats sometimes go missing in the car. It is especially the case of kittens.

In the case of Wasabi, I guess she went in through a small hole at the end of the gas pedal. In addition, cat may be in small gaps or unexpected places, such as under a door pocket or seat. If you cannot find a cat even if you are looking for it, the best thing to do is to bring your car to a garage (auto repair shop) or the dealer. In the case of kitten, they especially have no physical strength. And depending on the season, there is a high possibility of dehydration in a few hours.

Wasabi wasn't found when checking the dashboard at the auto repair shop, but as a result, she was saved by the cat's voice app. I think such a case is rare, but I recommend that you try any possible way! 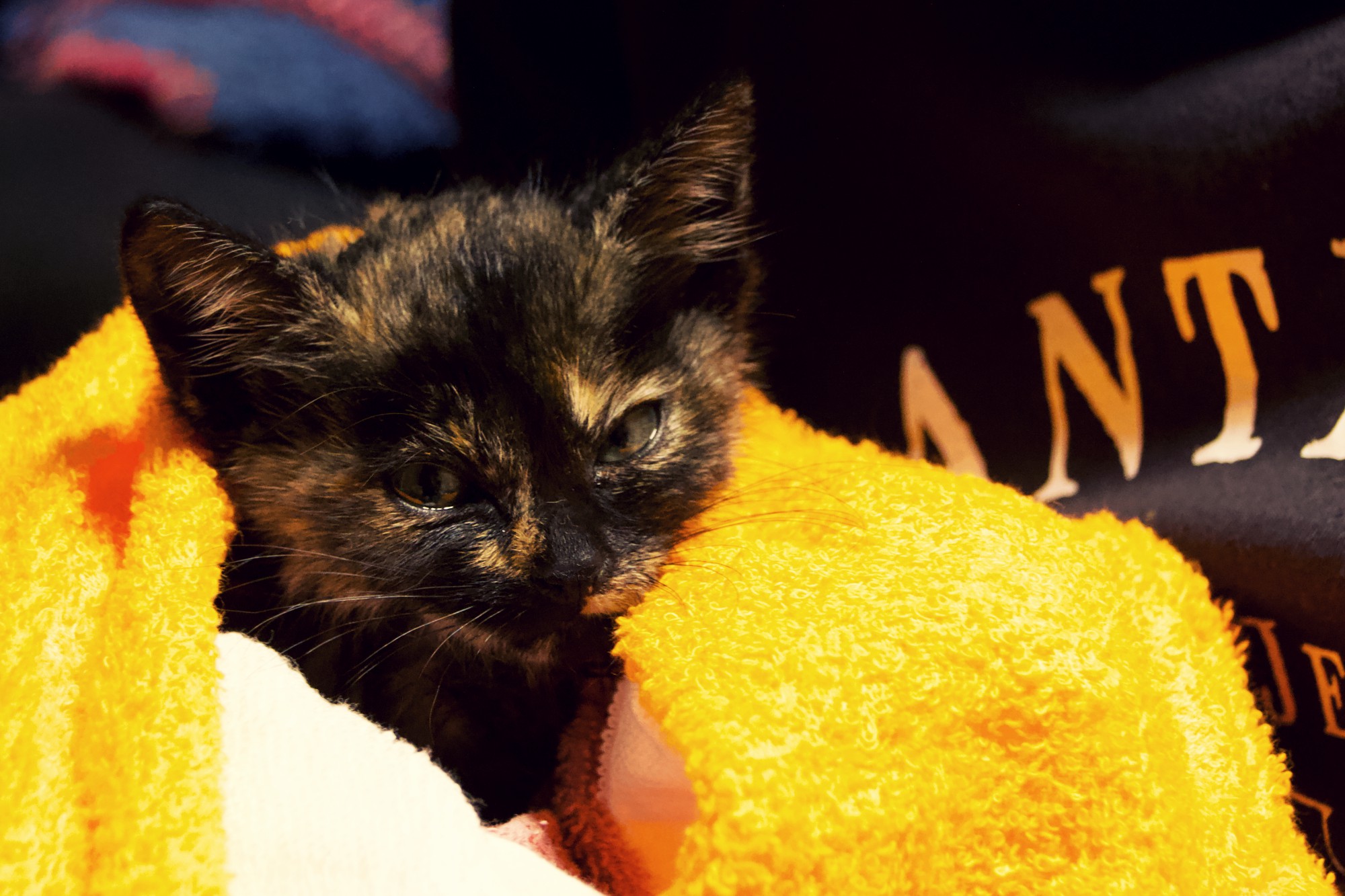 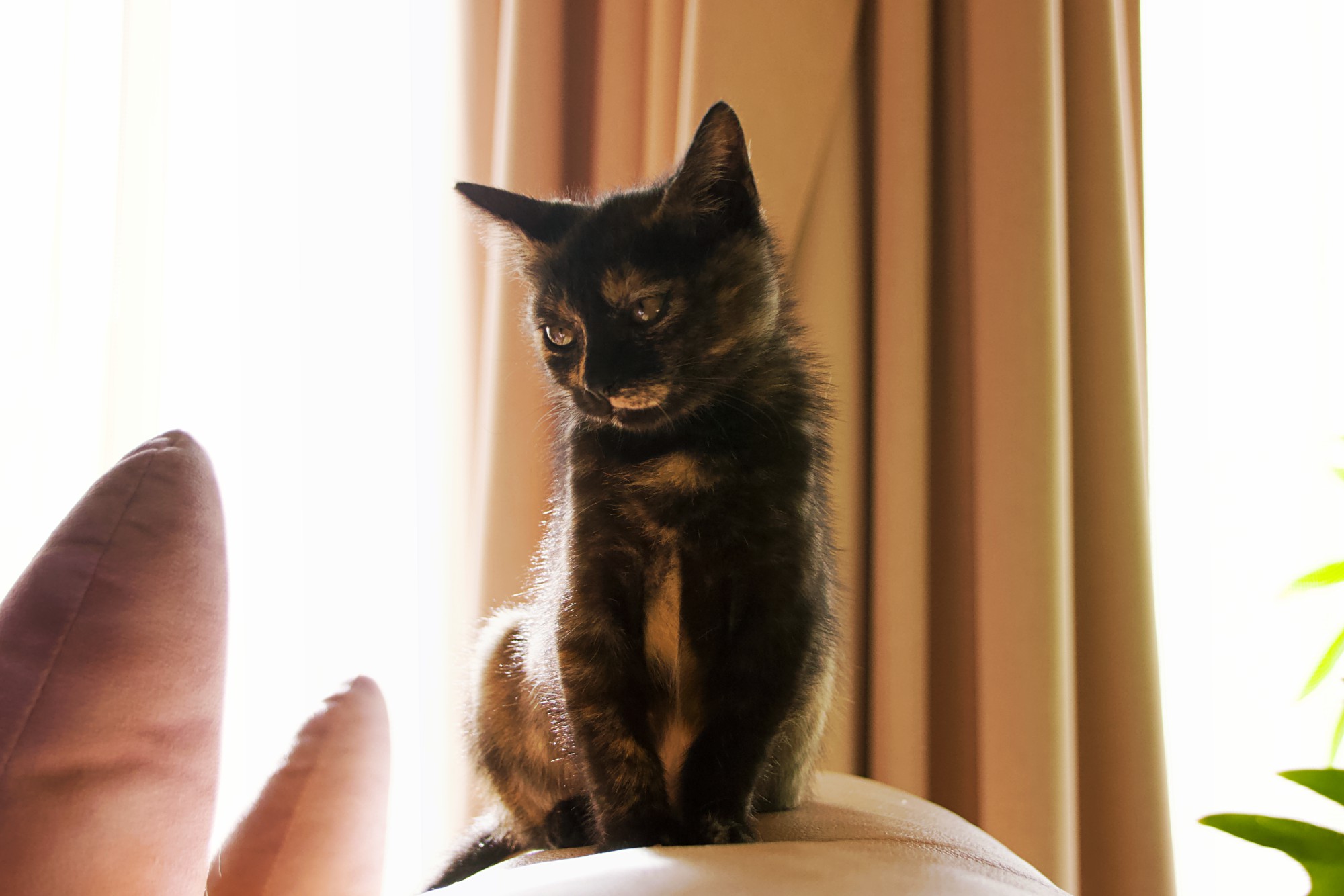 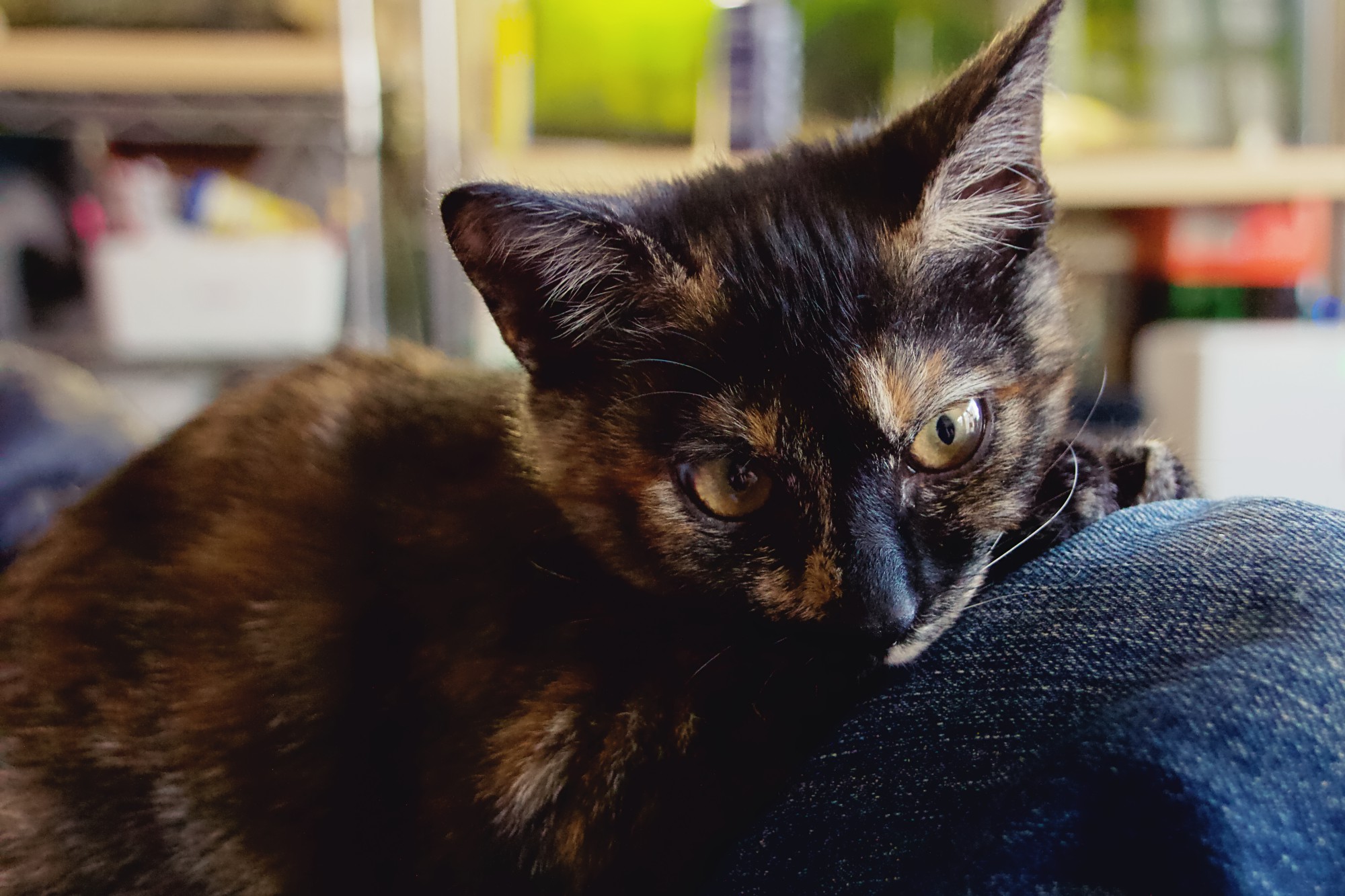 When the color of her eyes turned yellow 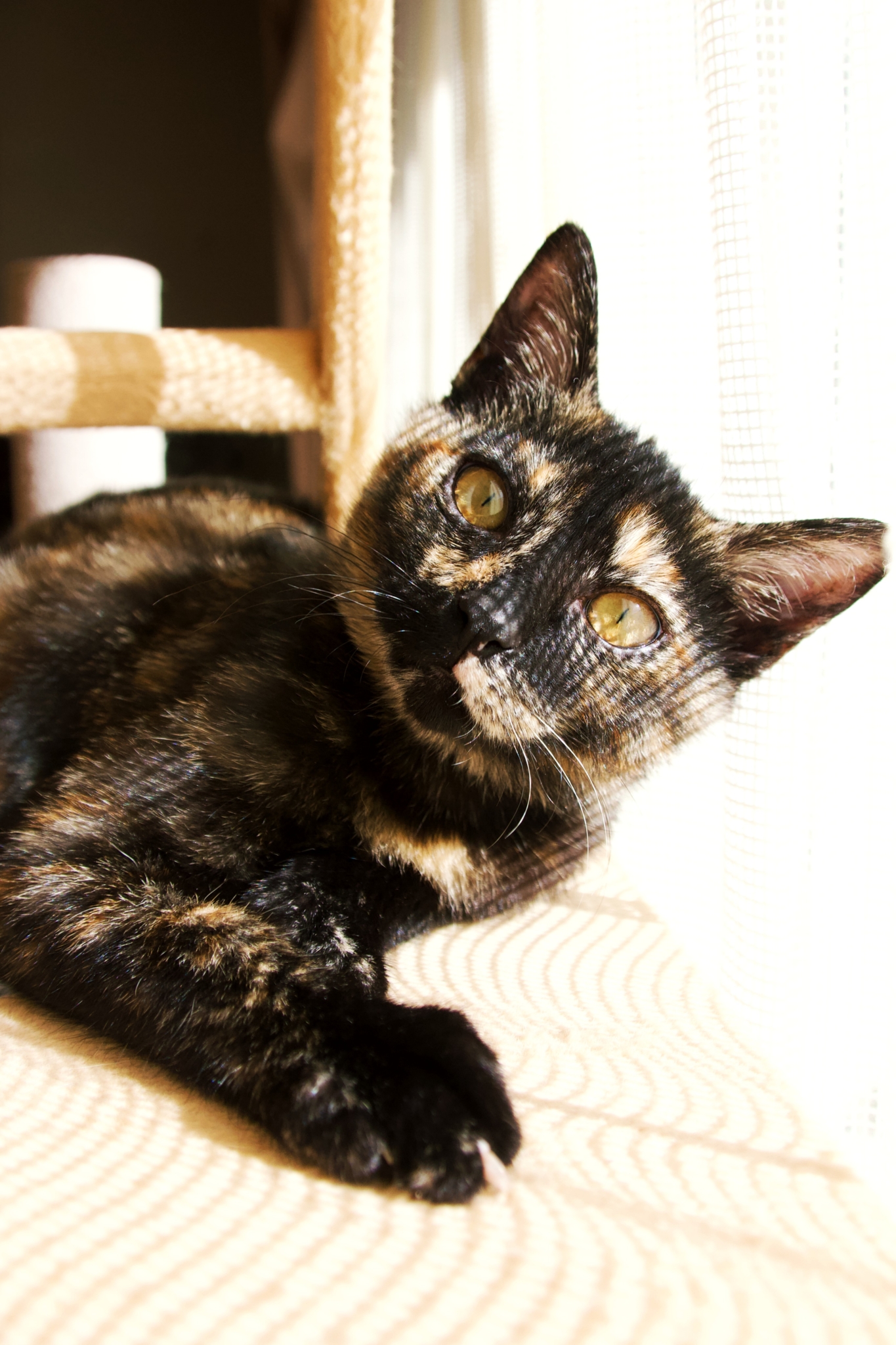 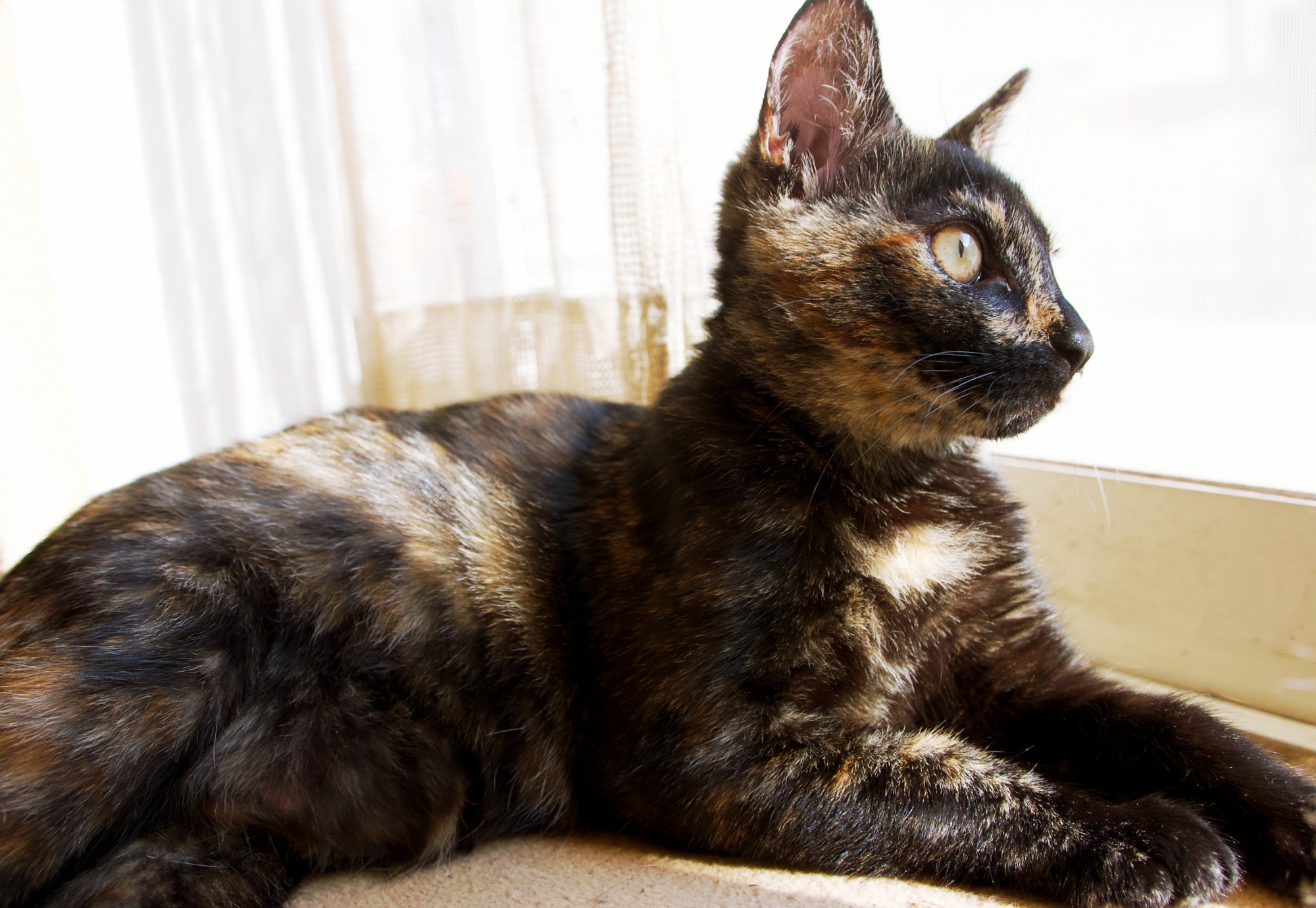 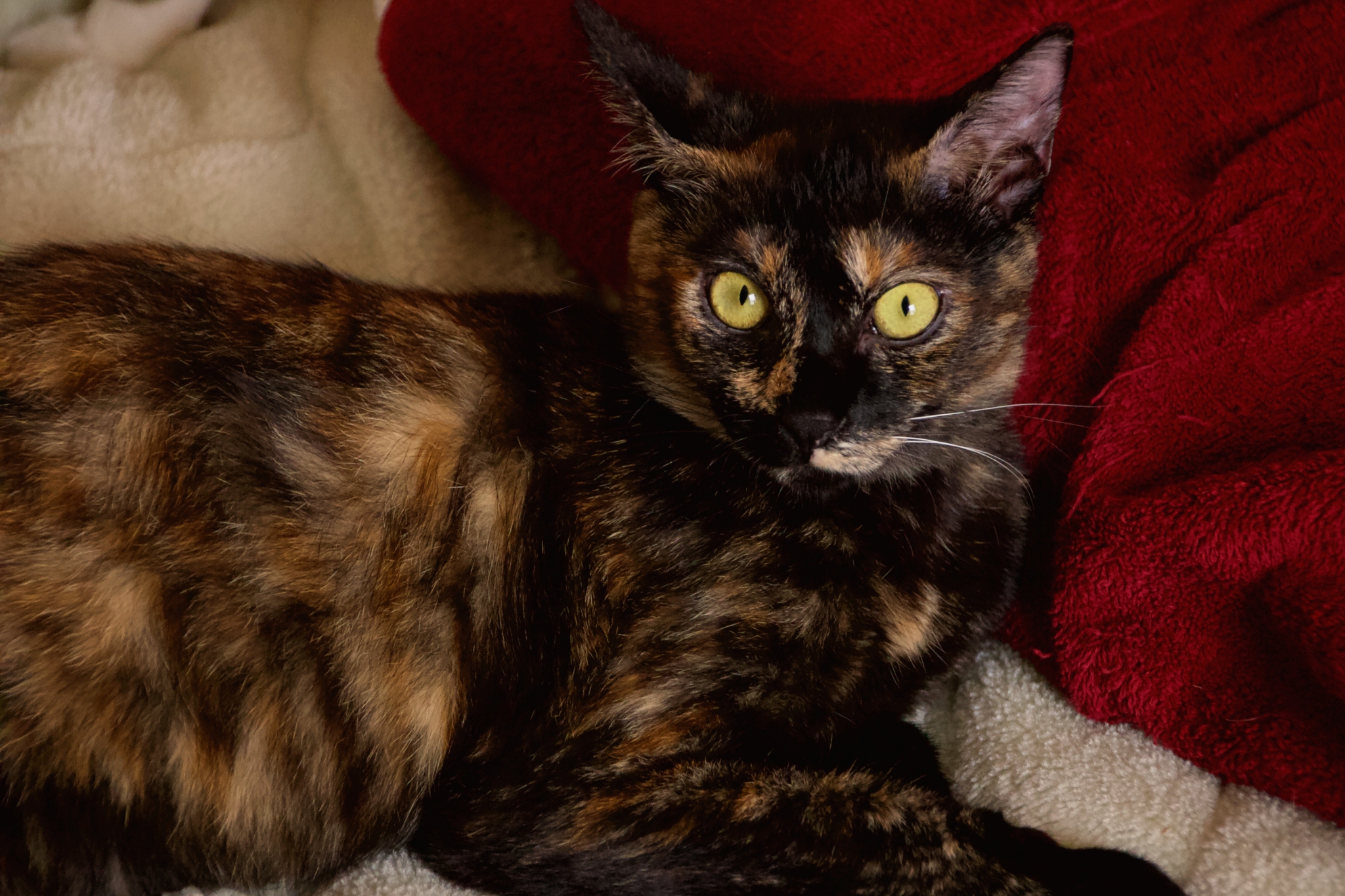 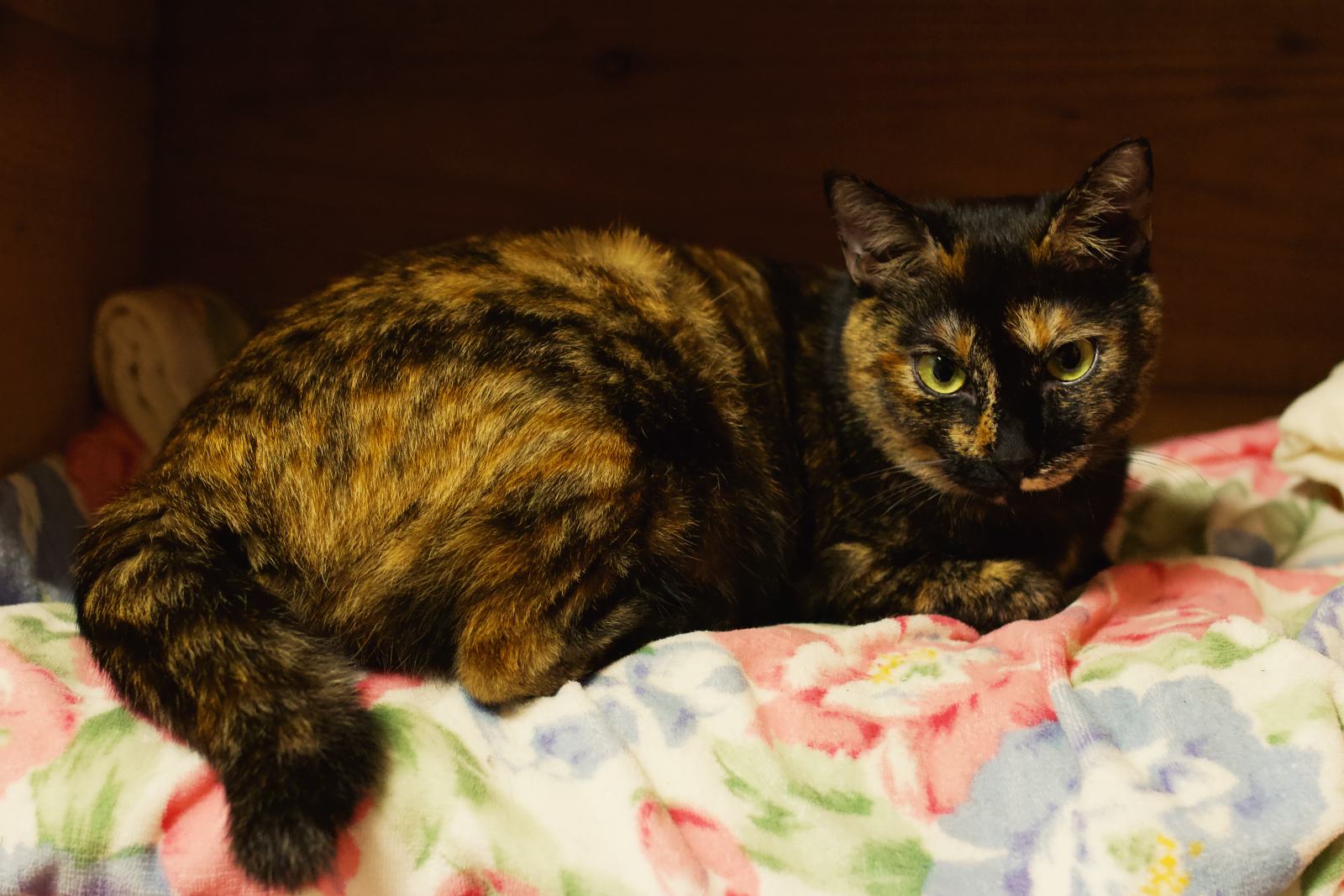 A sequel to the story. I went to my mother's parents' house again for the other kittens, but they weren't there already. The mother cat must have felt danger and moved. I thought I really done terrible thing for the mother cat. However it was good to bring Wasabi home. I had a bit mixed feelings, but the worst thing is to die.

Then when Wasabi came to my house, she was very light in weight for her age, and a lot of grass was attached. (Bidens pilosa var. pilosa /センダングサ, the grass has splinter form, it attached to animals and fibers and breed.)
However, the results of the test were all good. ( cats FIV and FeLV were negative) Now she is very affectionate and sleeps with her every day. Tortoiseshell cats are unpopular cats, but I think they are very smart and cute.

As an aside, all the cats in my house, except for one (Kurumi), I found and took my home. Kurumi, I'll introduce the cat in the future.

See you next time! 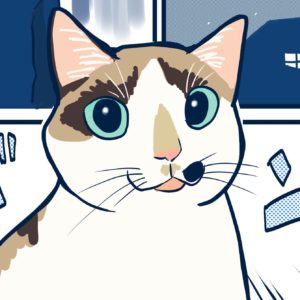 No.20 "The fateful meeting with my cat Aporo."

Thank you for visiting my web! This site is my spiritual comic website, I express with comic what I felt and experienced. This time I will introduce about my cat Aporo. She often appears in my comic. Meeting with my cat Aporo In September 2012. One autumn night, when I came home there was a cat at the entrance. The cat was a little thin and the fur was rough, but she has beautiful blue eyes. "Meow!" She noticed and got closer to me. I was surprised because she was very friendly cat. From that day she began to visit ...

前へ
No.25 "Your minerals may be tired!? Thinking about the mineral's purification."
次へ
No.27 "Introducing mineral! Meeting with Moldavite!" 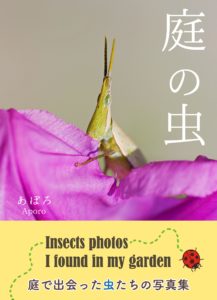 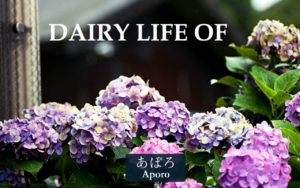 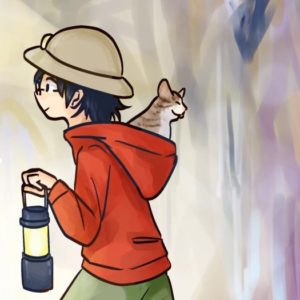 Thank you for visiting my web! This site is my spiritual comic website, I express with comic what I felt and experienced. I wish you a Happy New Year! May this New Year bring happiness and joy for you. And this year I'll update my English site little by little. Please look forward to it! 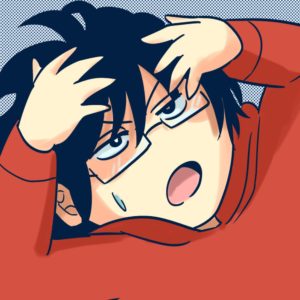 No.30 "Aura has layers? What is the seven layers?"

Thank you for visiting my web! This site is my spiritual comic website, I express with comic what I felt and experienced. The story of "Is this real !? I'm able to see my aura a little" is here. The story of about 2015. I continued to practice seeing my hands aura, but I didn't improve very much. Something like the aura I saw was "white." However, it seems that aura is originally colored. I didn't know if lack of my spiritual skills or the way to see is different, but I thought that I want to see my aura ... 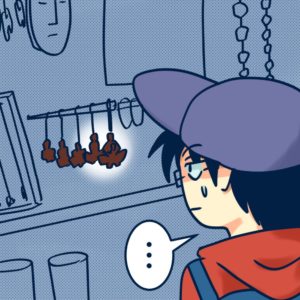 No.29 "The lucky keychain!? Is object reside spiritual things or feeling?"

Thank you for visiting my web! This site is my spiritual comic website, I express with comic what I felt and experienced. The story of 2006. When I were looking at the goods at an Asian grocery store, I found an intrigued item. It was a small figurine keychain.It was a small wood carving sculpture. They were of many types, carrying musical instruments, sitting cross-legged and more. I thought "It should be like an amulet of another country!" Usually I'm not interested in like that goods, but somehow I decided to buy the keychain. Moreover, I bought also two! Thus ... 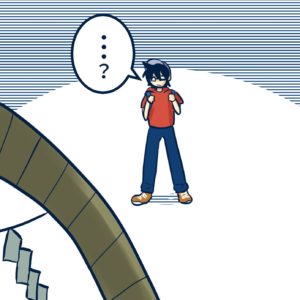 No.28 "Nagoshi no Oharae! What is Chinowa Kuguri and Katashiro?"

Thank you for visiting my web! This site is my spiritual comic website, I express with comic what I felt and experienced. This is the story of early summer several year ago. When I visited the shrine, I found mysterious things in the front of the gate. It was a big ring. It looked like it was made of straw and the size was enough for people go through. I wonder what this is? There was a description there, and it seems to be called "Chinowa kuguri (茅の輪くぐり)". If we go through as described in this ring, it appears that ... 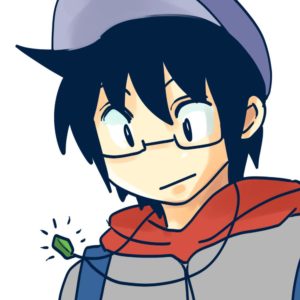 No.27 "Introducing mineral! Meeting with Moldavite!"

Thank you for visiting my web! This site is my spiritual comic website, I express with comic what I felt and experienced. It was April 2016 I suddenly thought, "I would like to go abroad." So I decided to travel other countries. October 2016. I went to Germany, Czech Republic and Austria. It was my first solo travel and I had never been abroad. That was a bold attempt. This story is about the Prague Zoo I visited on the second day of my travel. When I enjoyed watching various animals in the zoo. And then, found a mineral store. ...